A Welcome from The Alberta Legislature 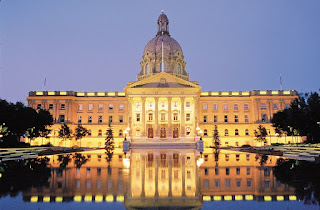 The Alberta Legislature is not a conventional museum. At first glance, its only artifacts seem to be a building and portraiture of long-forgotten lawmakers who maintain an air of solemnity (despite visiting schoolchildren making fun of Speaker Wilson’s prodigious mustache).

It is much more than that, however.

Our mandate is broad: to educate the public about the functions of government, to share the province’s political and social history, and to let Albertans know that the handsome Beaux-Arts building in the river valley isn’t just a landmark or an office for politicians. It belongs to the people of Alberta.
Read more »
Posted by Alberta Museums Association at 15:16 No comments:

Greetings from the Art Gallery of Alberta

The Art Gallery of Alberta (AGA) is a centre of excellence for the visual arts in Western Canada, connecting people, art and ideas. Located in the heart of downtown Edmonton and on Treaty 6 territory, the AGA is focused on the development and presentation of original exhibitions of contemporary and historical art from Alberta, Canada and around the world. Founded in 1924, the Art Gallery of Alberta maintains a collection of over 6,000 objects and is the oldest cultural institution in Alberta. The AGA is the only museum in the province solely dedicated to the exhibition and preservation of art and visual culture. 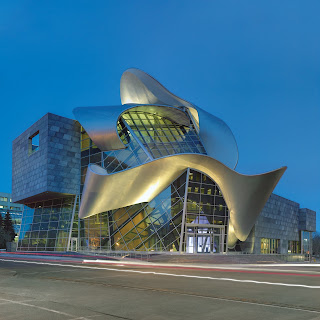 The AGA’s iconic building is a local landmark and serves as an inspired tribute to the city. The previous building was built in 1969 and designed by Architect Don Bittorf. The building was a shining example of Brutalist Architecture, which is characterized by its use of concrete and strong geometric forms. By the early 2000s, due to out-dated mechanical systems and external envelope, a new building was needed. An international architectural competition was launched in 2005 with design submissions coming in from all over the world. Architect Randall Stout from Los Angeles won the competition with his thoughtful and inspired design. Upon entering the competition, Stout visited Edmonton and was inspired by two key things about the city. The largest source of influence was the Aurora Borealis. The ribbon of metal that runs through the main atrium of the building has been called the “Borealis” as a nod to this influence. The second source of inspiration is Edmonton’s river valley. The ribbon of steel cuts across the grid of the glass in the same way that the river cuts across the rectilinear grid of the city streets and avenues.
Read more »
Posted by Alberta Museums Association at 10:30 No comments:


Laura Huerta Migus is Executive Director of the Association of Children’s Museums, the world’s largest professional society for the children’s museum field. She previously served as Director of Professional Development and Equity Initiatives at the Association of Science-Technology Centers. In 2016, Laura was named a White House Champion of Change. Laura Huerta Migus will be a panellist at the Closing General Session and Panel: “Museums UNITE to Improve Communities” taking place at 9:30 a.m. on Saturday, September 23, 2017 at our upcoming conference.

Can you describe how the Association for Children’s Museums is working to address social issues in your community? 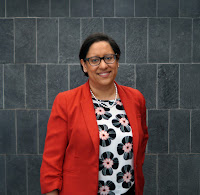 The Association of Children’s Museums (ACM) serves as the collective voice and platform for action for the children’s museum sector worldwide. Children’s museums are unique in the museum world in that the universal content focus is on the audience (children and families) rather than on a specific content area or discipline.

This focus lends itself necessarily to taking into consideration the entire social environment the children our members serve in all areas of museum function. Through intensive dialogues with our board and members, as well as attention to the national and international landscapes, ACM has developed a variety of initiatives over the years to support our members taking positive action in their communities on social issues affecting children.

An example of how ACM works to empower our membership in their work on social issues with respect to inclusion and unity is our 90 Days of Action campaign, which just ended in May (http://childrensmuseums.org/about/acm-initiatives/90-days-of-action). In response to the current anti-immigrant and refugee rhetoric in the United States and around the world, we saw an opportunity to celebrate and amplify the work of children’s museums in serving immigrant and refugee children and families. For 90 days, we implemented a social media campaign sharing case studies and statistics on how children’s museums work in this space, as well as new efforts launched by our member institutions. The campaign garnered a number of media hits, and also served as a platform for individual museums to launch efforts through their own social media channels.