The Alberta Museums Association would like to thank all of our delegates, speakers, and partners for making the Future Coalition Summit a success. It was an exhilarating day of spirited conversation, thought-provoking sessions, and new connections. Stay tuned for information about the Future Coalition’s ongoing work and the impact of the Community Engagement Initiative in Alberta’s communities.

We would also like to thank Sam Hester for creating the wonderful graphic representation of the day’s discussions, themes, and plans. A high resolution photograph of the graphic is available HERE. 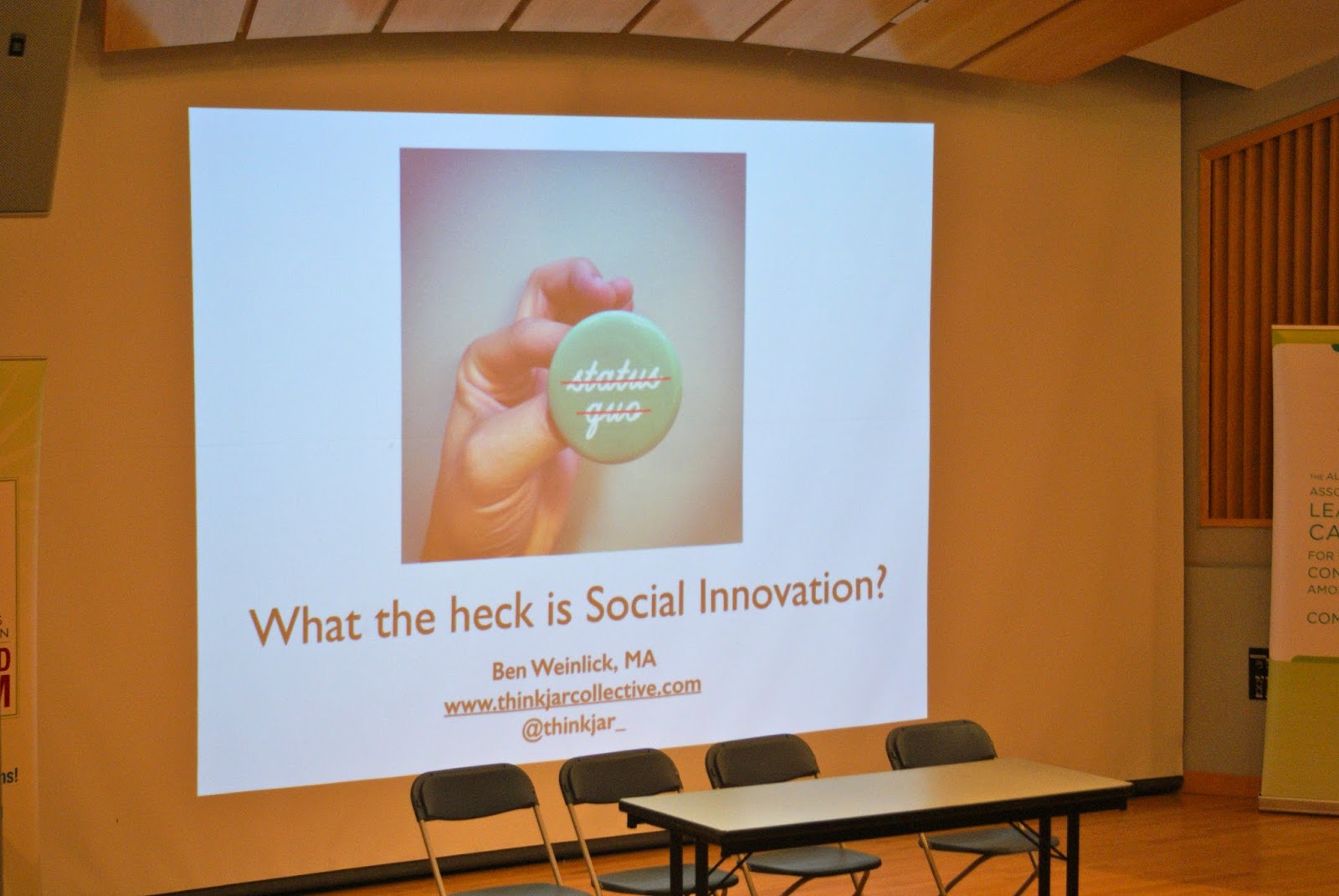 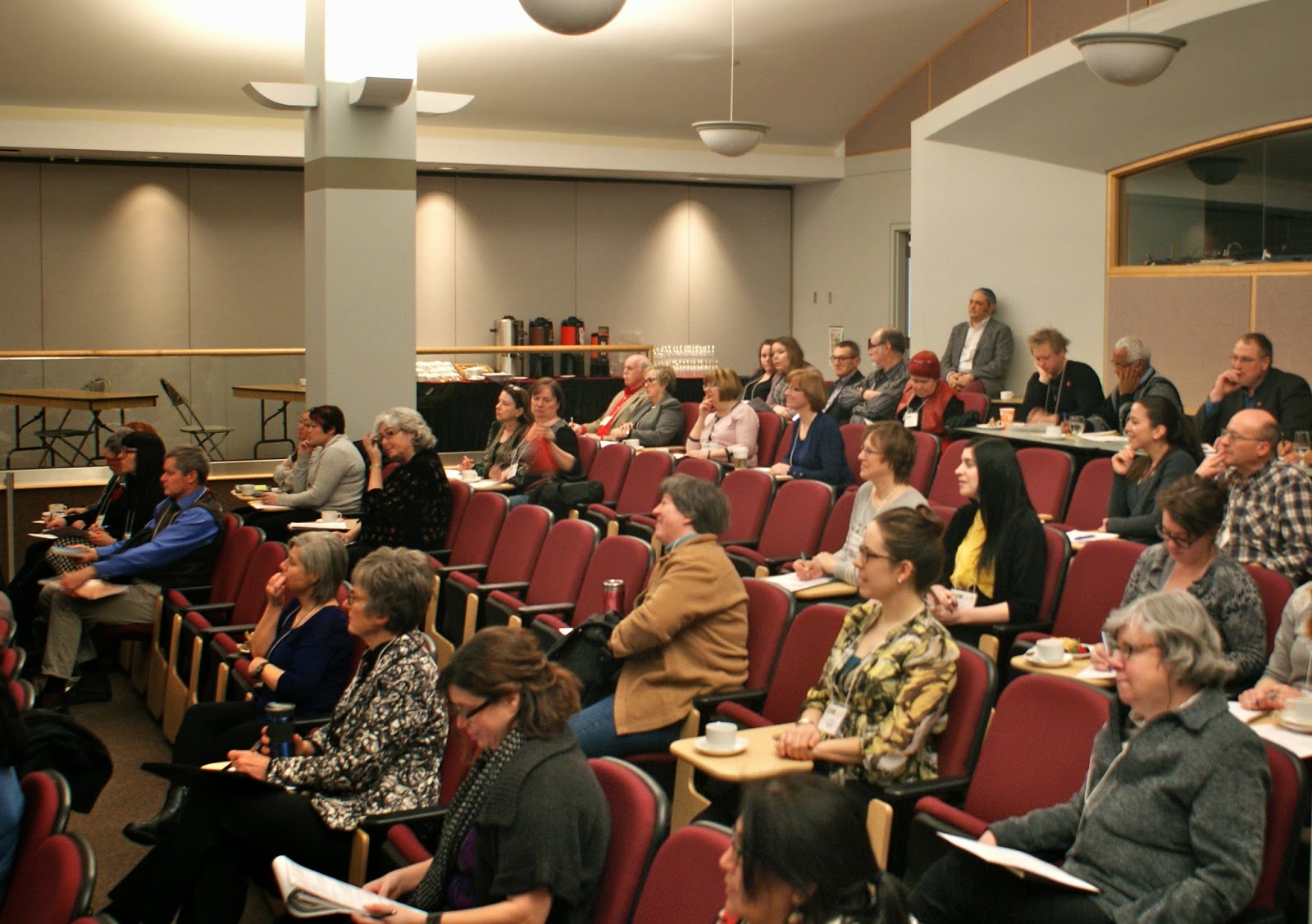 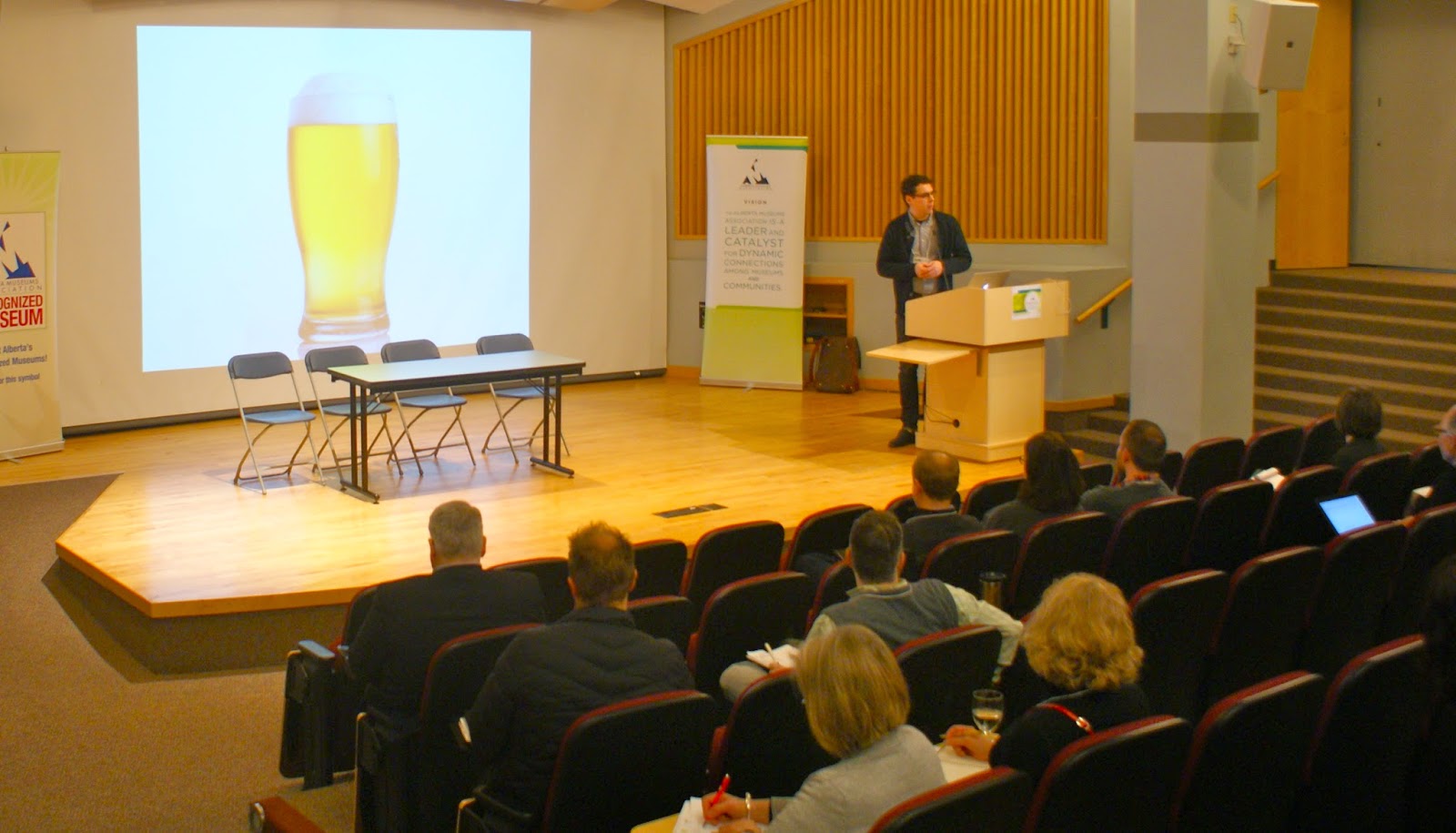 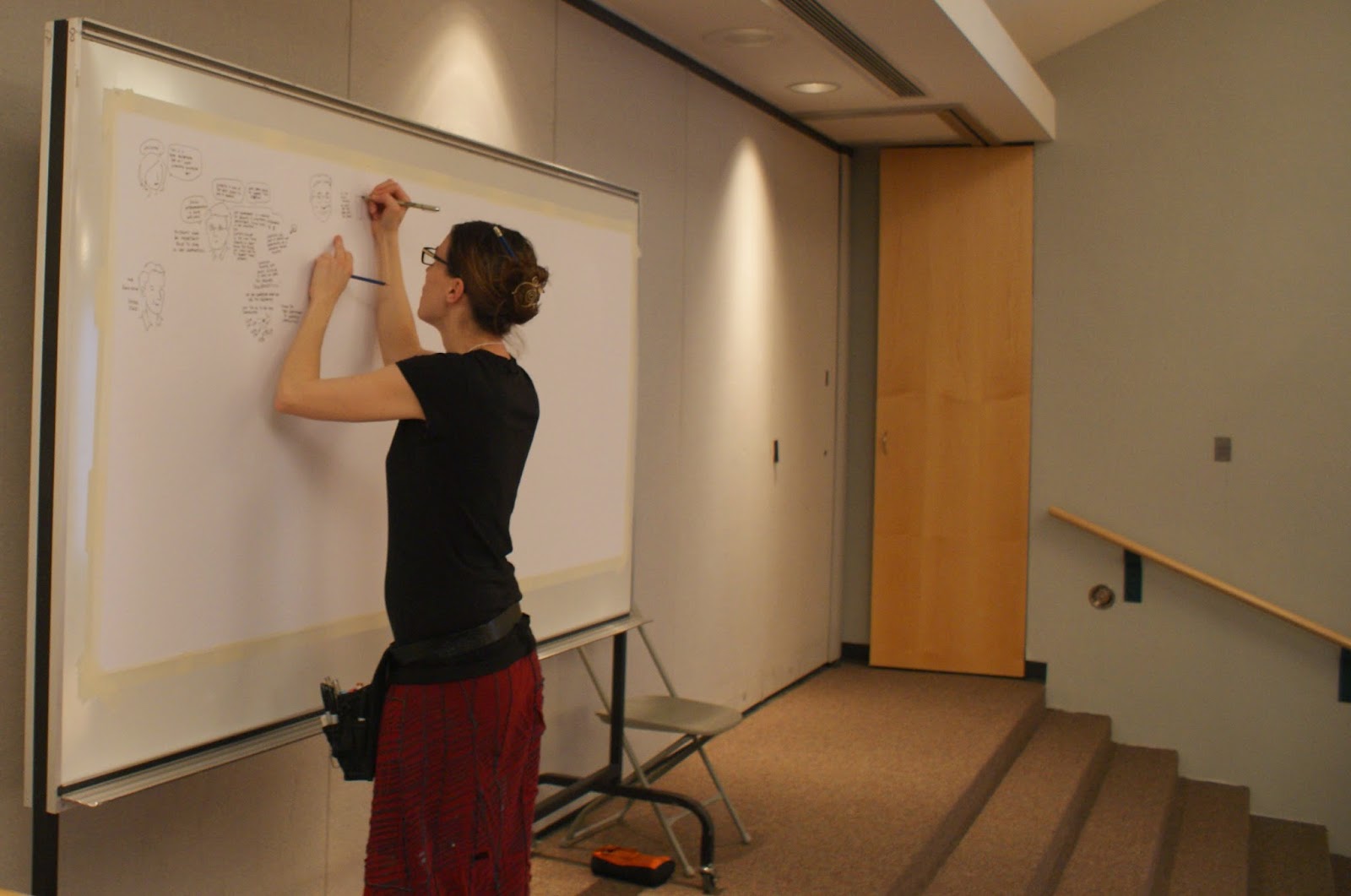 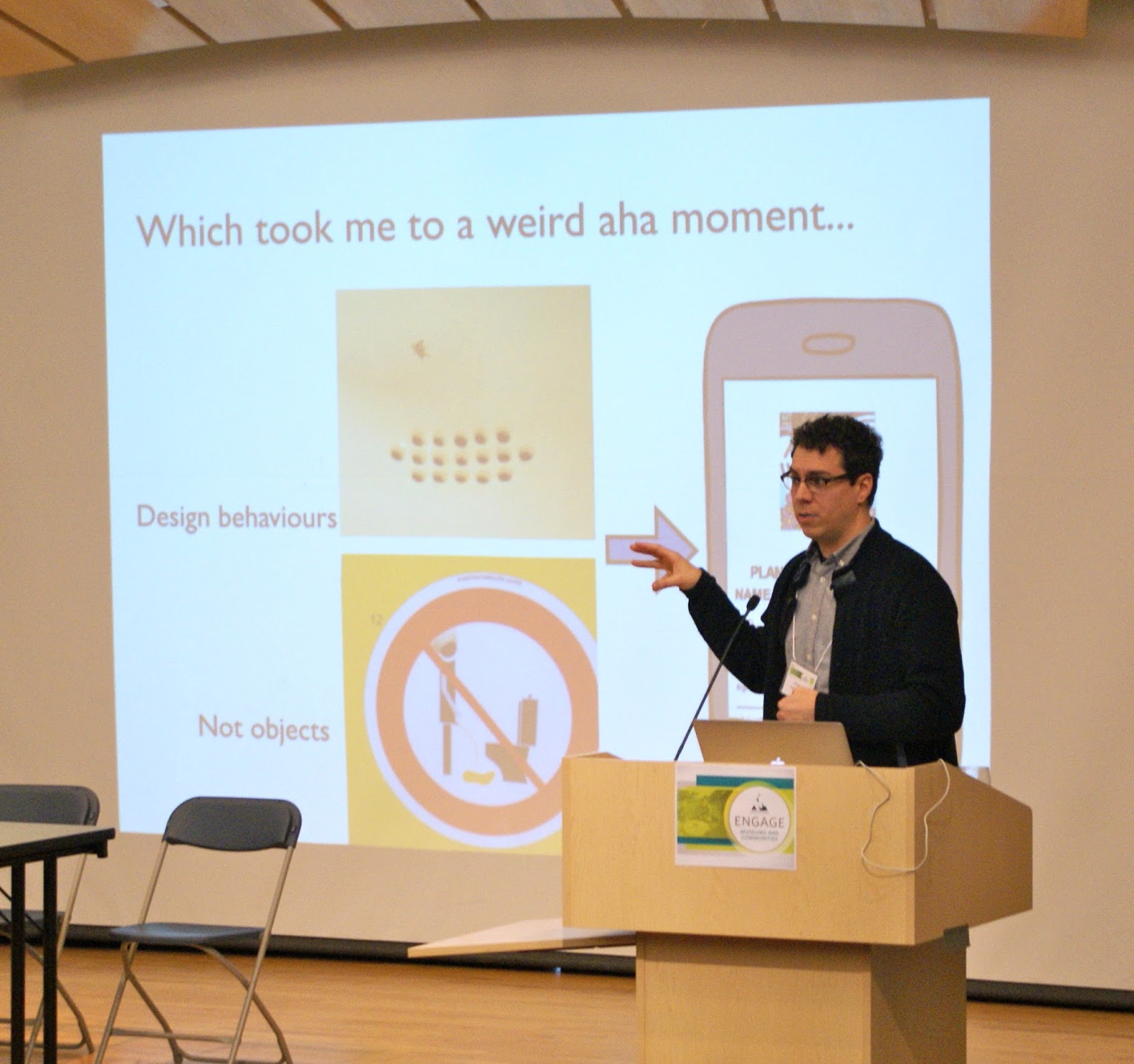 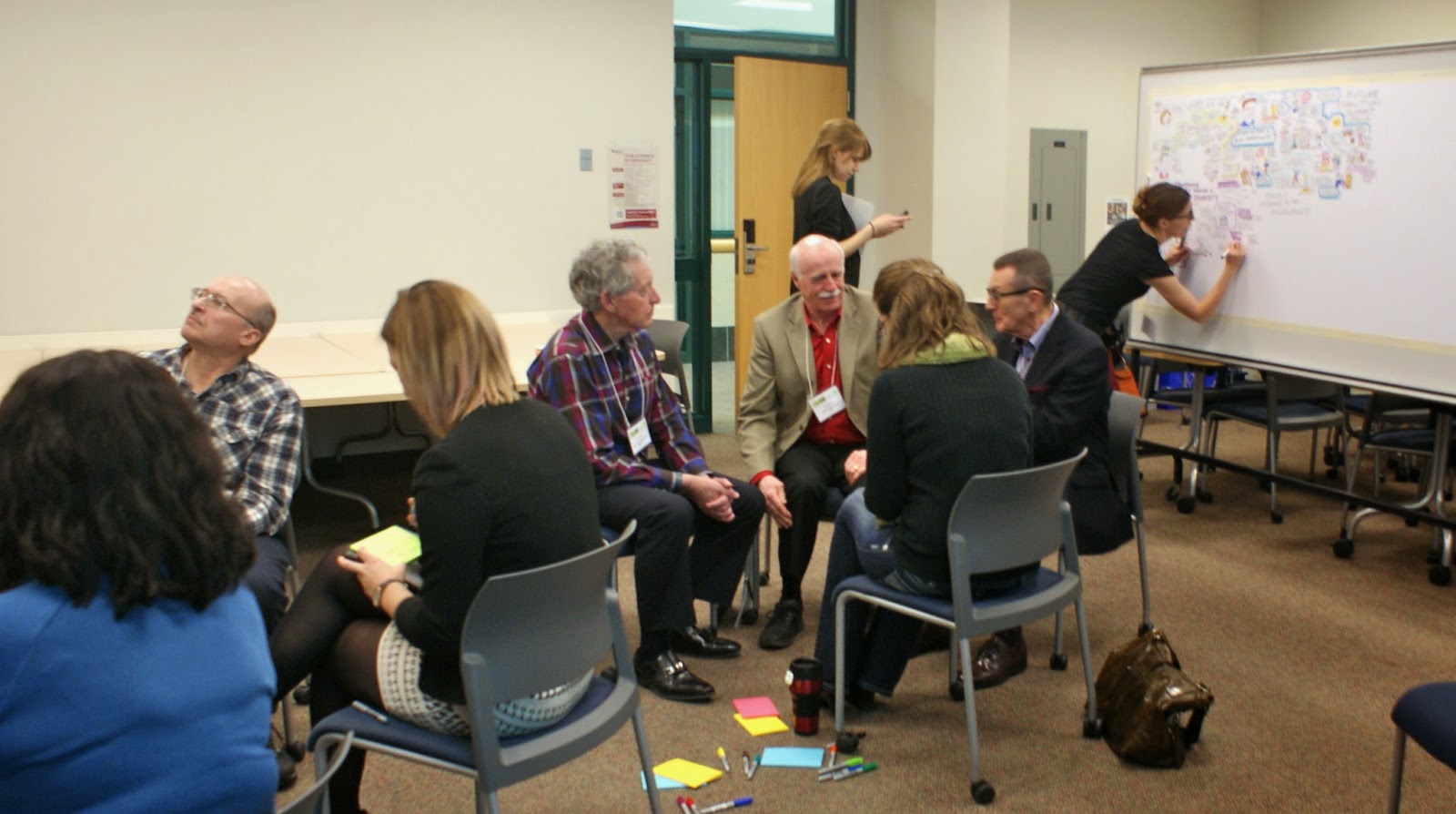 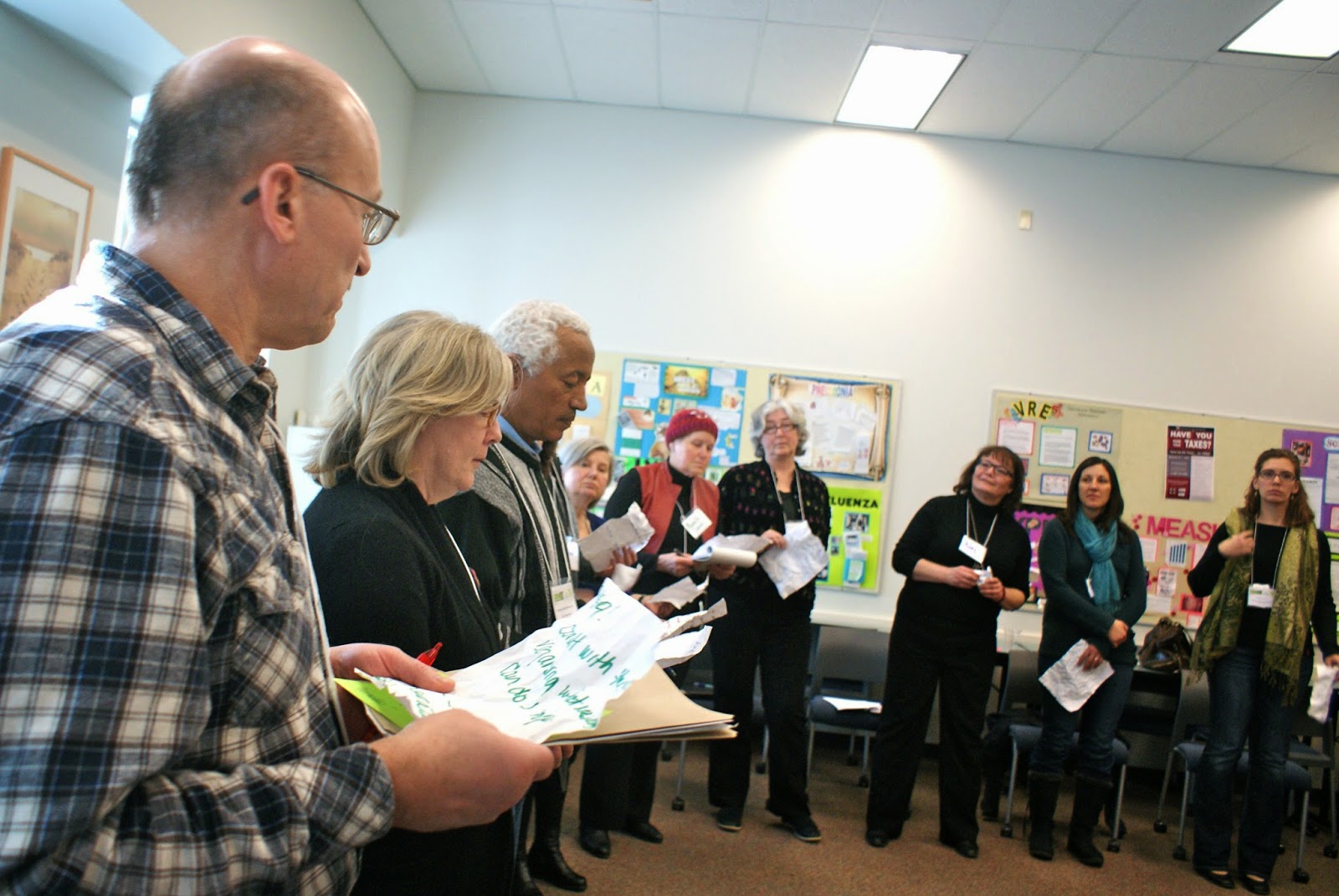 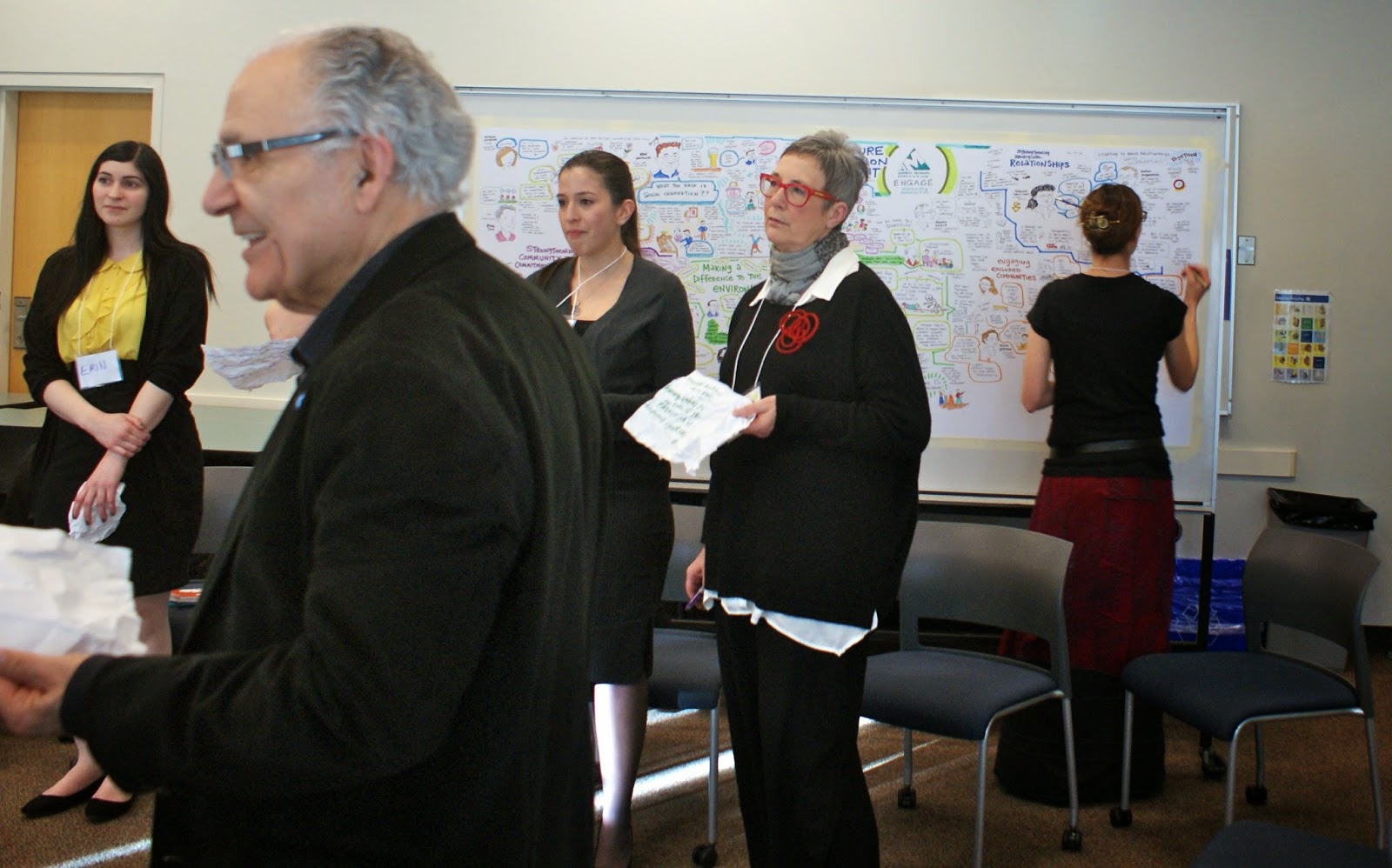 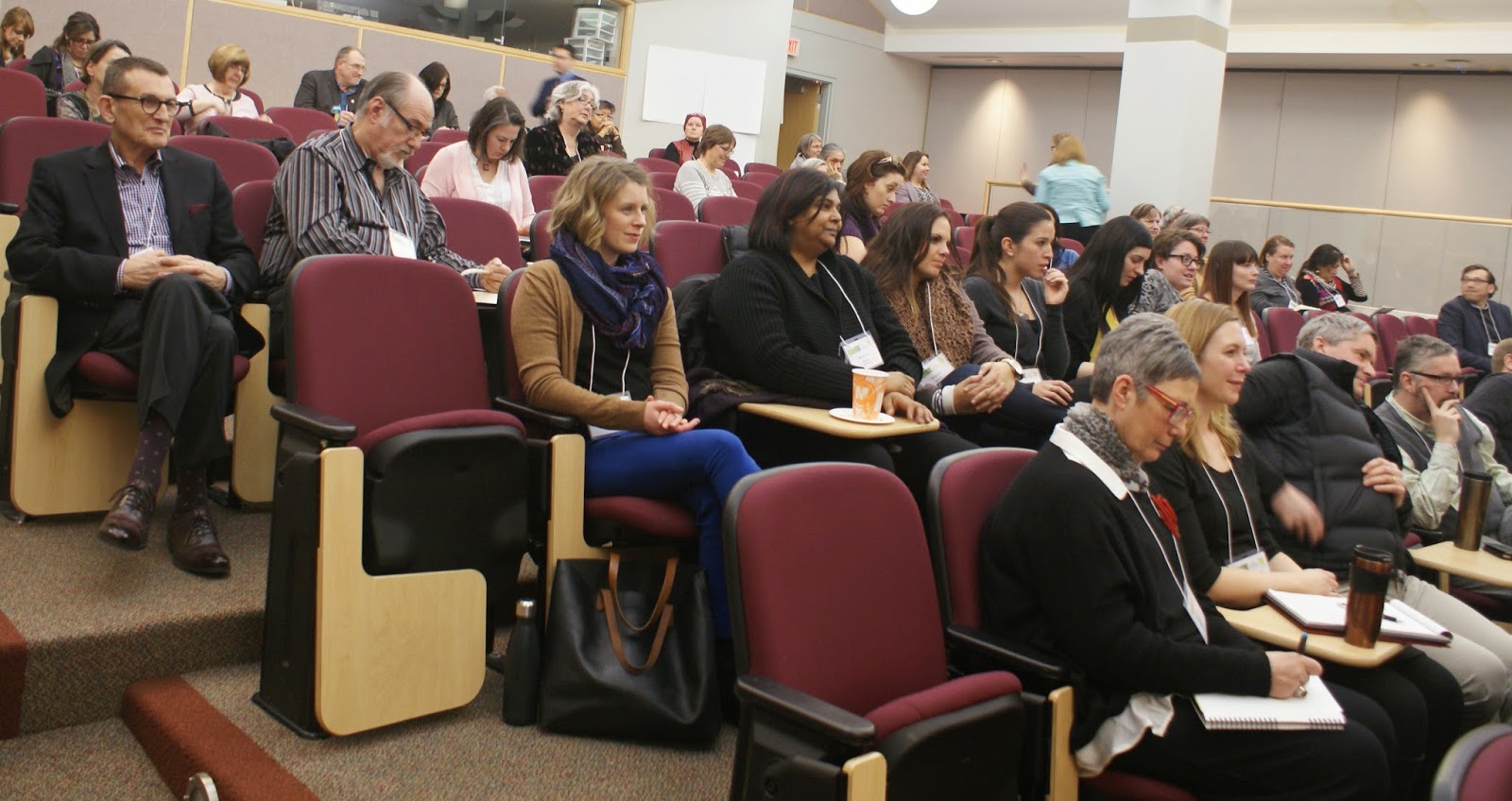 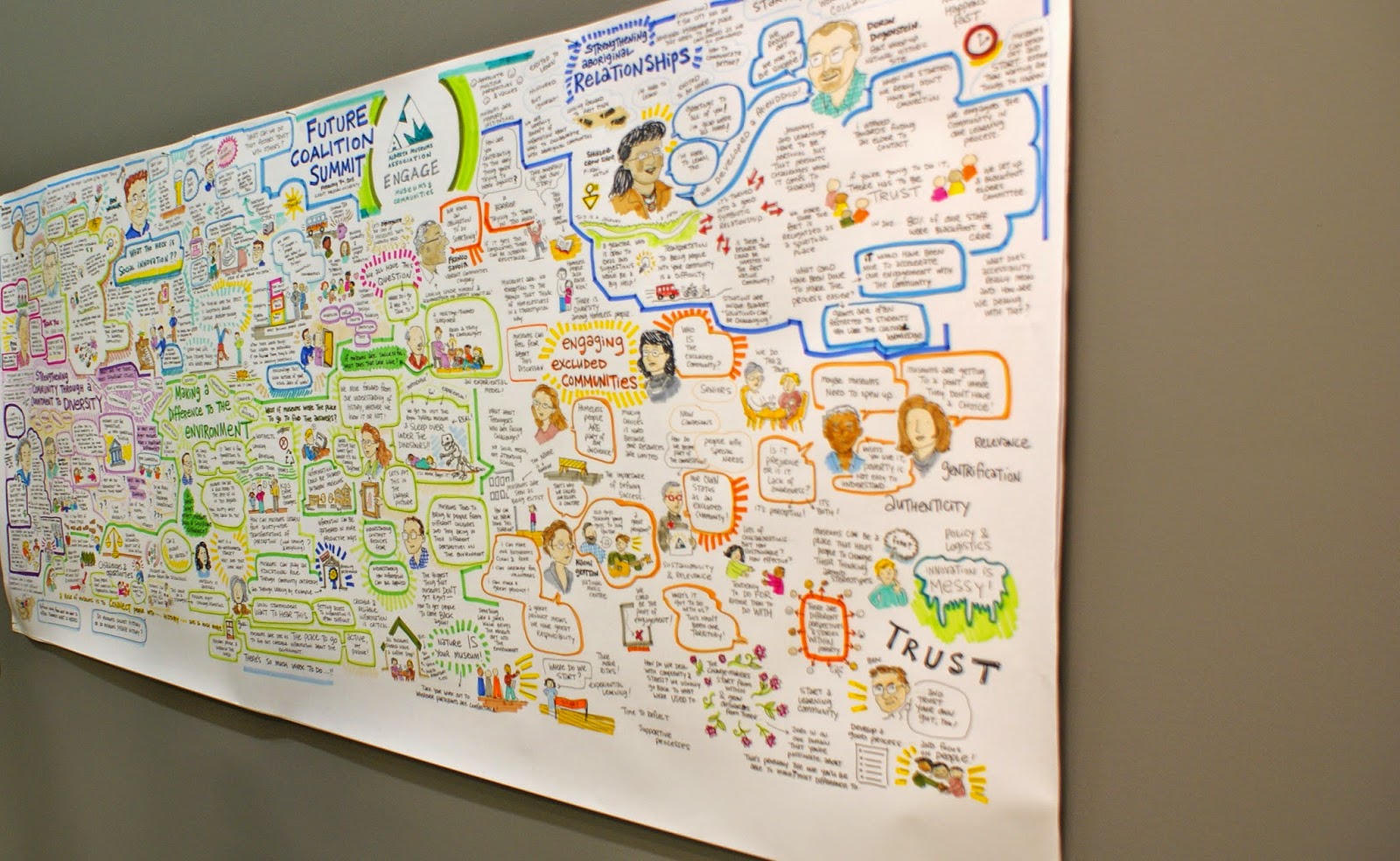 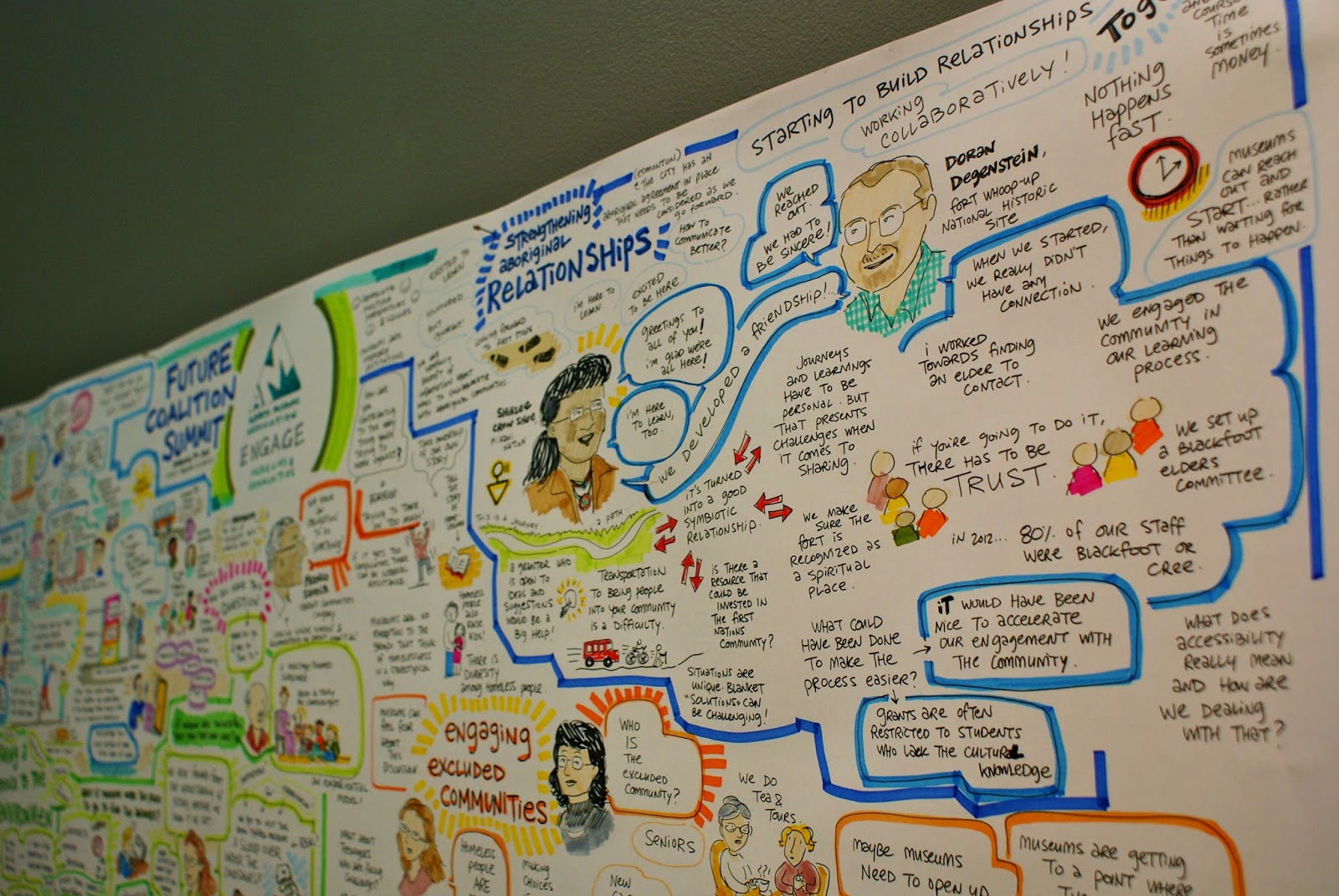 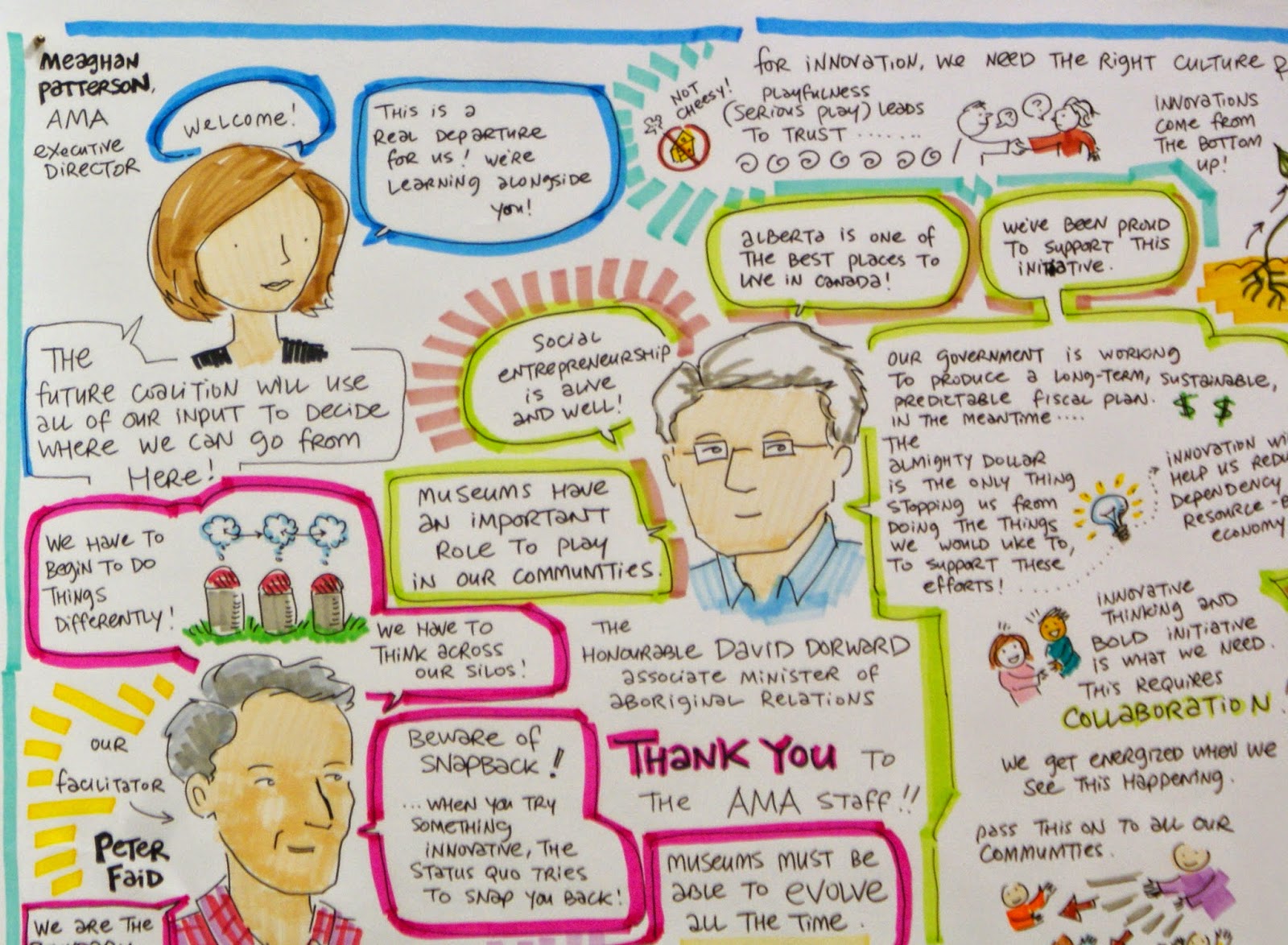 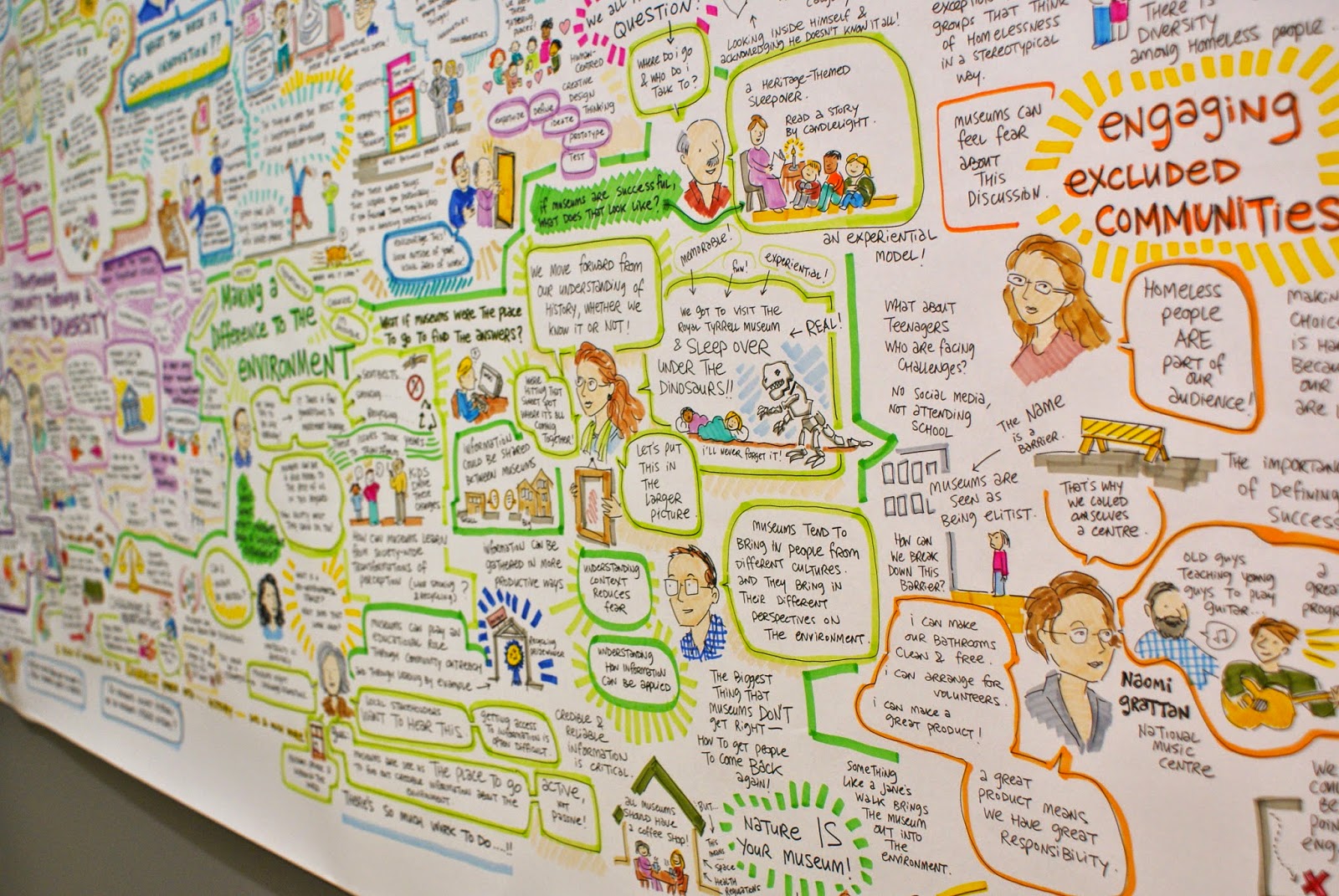 Check us out on Twitter @AlbertaMuseums, and see the day's conversation at #engageAB!

Posted by Alberta Museums Association at 14:32 No comments:

By Paul Born, President, Tamarack,  An Institute for Community Engagement

A small regional museum reached out to their community to develop an exhibit and also a speaker series commemorating the year of the refugee. They engaged local agencies that supported refugees, business leaders who identified as coming to Canada as refugees, as well as politicians and bureaucrats. Most importantly, they engaged recent refugees to their community.

These individuals formed an advisory group of about 25 people. Together, they raised the money for the exhibit and gave input into the exhibit design. Many of them also donated their time and stories to the workshops held during the six month exhibit.

The exhibit was one of the most successful in the museum's history. Involving leaders from so many different sectors opened doors to promoting the event for the museum. Diverse voices provided amazing creativity in the creation of the exhibit, and building such a diverse network created an opportunity to build its credibility with constituencies they never had before, which resulted in increased donations.

1.      Diversity encourages creativity. Diversity builds new relationships. Diversity opens doors to new possibilities. Allow for emergence in planning processes. Once members of your diverse team get to know each other's stories, they will become engaged and their contribution value will increase.

2.      Multi-sector teams are more open to discovery and story than single sector teams. Once a team is formed, give members time to tell their stories before moving into planning and tasking -- then wait for the miracle of engagement.

3.      To build a multi-sector team, we most often start with engaging the agencies serving the issue we want to address. In this case, the agencies servicing refugees could easily identify business and government leaders willing to help.

4.      Communication is critical in all engagement strategies. Build a data base of names from day one. Grow it by people joining the list during the exhibit. Create a communication piece (newsletter with update and stories) that is sent regularly and captures the excitement.

Posted by Alberta Museums Association at 07:45 No comments:

By Paul Born, President, Tamarack,  An Institute for Community Engagement

A museum has the ability to attract many visitors each year. Most of these visitors purchase a ticket, enjoy the museum collection, and leave.

What would it look like if we created a more robust approach, becoming more deliberate in deepening our client relationships?

Lucy shared with me the story of her museum. When the museum developed a loyalty program, everything changed. Not only were members recognized for their involvement, staff started to notice and think differently about those members who were most involved. The loyalty program made all those who were involved more loyal. Firs, members were recognized for the number of years they had been involved. Those that had been members for ten years or more were given a gold card. Members were also given credit for the number of visits they made each year, by simply placing a sticker on their seasons pas each time they came. Lastly the museum has an annual reception for those in the loyalty program, with awards and gifts. Deepening relationships is so often about doing the small things really well.

1. Define your goals. Clearly identify what a deeper relationship would look like. At Tamarack, we have thousands of new ‘explorers’ who visit our website every year. Our first goal is to have them provide their e-mail addresses and grant us permission to send them information. Individuals or groups who achieve this stage of engagement are called ‘members’. Our desire is for our members to be as effective as possible and to sign up for one of the many workshops we provide. We consider people engaged at this level as ‘partners’, and develop special commitments with them. Lastly we encourage our partners to contribute their knowledge to the group, and in turn, create co-generative peer-learning. These contributing individuals are then called ‘associates’ and are invited to form communities of practice. What is your approach to deepening relationships with people who care about your work?

2. Keep current members informed. It sounds basic, but to give people who care about you the ability to stay in touch is the best way to deepen the relationship. The challenge is to find a way to tell your story so people will listen. At Tamarack we now send an e-magazine to all our members, we use twitter and Facebook for those inclined to follow our story that way, and as often as possible, we send personal notes. How do you keep those who care about your work informed?

3. Create opportunities for member involvement and evolution. People want to deepen their relationships with organization that they care about. We need to give them opportunities to do so. At Tamarack, we are now considering a loyalty type program in which members get specific discounts and people can “earn” higher status. We are trying to be intentional in recognizing a deepening relationship with people that care about us – what approach might you take?

4. Keep your friends. Your mother may have reminded you, when you had a falling out with a class mate, “It is easier to keep friends than make them”. The same is true with deepening relationships and growing your network of loyal supporters. Never take members for granted. At Tamarack we love to say thanks often - how do you thank those members that care about your work?

5. Thank your friends. Keeping friends is all about caring about them, and caring about them is the best way to say thank you.  The job of thanking friends is everyone’s in the organization – it is in all the staff and volunteers job description: to first thank each other, and then to thank those who support the good work we all care so much about.

Posted by Alberta Museums Association at 08:56 No comments: