A wonderful perk of working for the Alberta Museums Association is the opportunity to travel across the province and experience various communities and their regional museums. The site visits we conduct with member institutions allow us to meet people involved in all aspects of museums as staff, volunteers, or board members. Last year, Lauren Wheeler and I were fortunate enough to also meet the community members whose stories and passions are exhibited within the museum walls. At the Musée de St. Isidore, located very close to Peace River, the truly unique history of the township is shown throughout the museum and can be experienced in the attached community complex. At the time of our visit, the museum had not yet opened its doors to the public, but other tenants in the Centre culturel de St. Isidore could already see their lives and work directly reflected in the museum.

The francophone community of St. Isidore was transplanted from Quebec in 1953. The history of that move and the intervening years is interpreted through the artifacts and text panels in the museum. The fight for French language education in Alberta, which was spear-headed by the residents of this hamlet, is a key exhibition in the museum. Its lasting impact is evident in the school board that shares the building with the museum: the Conseil scolaire du Nord-Ouest. Marie Lindsay, a teacher in the district for many years, is one of the driving forces behind the museum. Our excitement over hearing this story encouraged her to take us across to the Centre cultural to meet the current professionals working to maintain the language and heritage for current students.

It speaks to the overwhelming pride of the residents of St. Isidore, and those operating out of the Centre culturel in particular, that before we had made it across to the building, we were introduced to several other people who were brimming with enthusiasm about the new museum.

Another highlight of the museum tour was the weaving exhibit, an artisanal industry in St. Isidore with a long history. We were thrilled to meet with and have a demonstration of the craft by two members of the Tisserandes de St. Isidore, the local weaving guild, another tenant of the Centre and another way in which history and the present day run parallel at the site. The weaving is done by hand using looms and the artisans are continually passing on their skills. We spoke to one weaver who described herself as ‘new to weaving’ despite being twelve years into her weaving education. There are several other groups who use the Centre culturel and each represents a key aspect of the heritage of St. Isidore. The stories of these groups, if not part of the permanent exhibits within the museum, are identified in a planned series of temporary exhibits which will occupy the entrance of the museum. 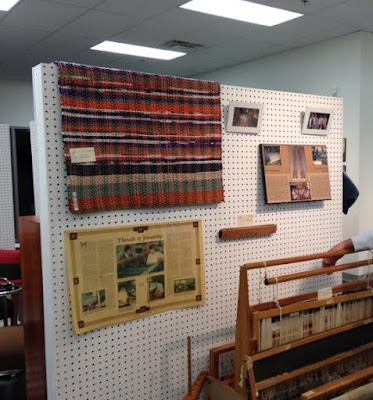 The vibrancy of the museum is due in part to the overall vibrancy of the St. Isidore community, but it would not be possible without Marie Lindsay and others who have worked so hard to develop such an inviting space. I left the Musée de St. Isidore feeling that I had a better understanding of how this rich community came to be, and confident that it would continue to grow and share the stories of its people.